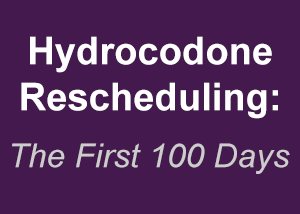 The paper’s objective was to conduct an Internet patient survey through the NFMCPA on reactions to the first 100 days following the rescheduling of hydrocodone to a Controlled Substance Schedule II medication.  With expert consensus, the investigative team repurposed some questions from prior NFMCP Internet surveys covering domains such as demographics and symptoms.  Of 7900+ survey responders, almost 6500  met the survey screening criteria and completed the survey.  Of those, 82.5% had been prescribed hydrocodone for more than one year.  The majority experienced some barriers, and 30% reported no changes in access to hydrocodone.  Of those who could no longer get hydrocodone

Most respondents had to visit their HCP more often (65.2%) and 30.3% reported some type of issue interacting with the pharmacy.  Most felt that the rescheduling was neither a fair, nor appropriate, solution to the abuse of hydrocodone (88.3%). For those still working, 46.2% reported that they had missed work because of the stricter regulations, and 27.7% reported having thoughts of suicide since the rescheduling.

The significance of this survey highlights the unintended consequences on people with chronic pain caused by the rescheduling effort to impede hydrocodone abuse; the policy is negatively impacting untold numbers of people with chronic pain.  These consequences include suffering from being placed on less effective drugs, increased cost, inconvenience and negative influence on physician-patient and pharmacist-patient relationships.

NOTE:  The NFMCPA launched the follow-up hydrocodone survey,  Hydrocodone Rescheduling: The First Year.  Please consider taking part in this follow-up survey to help broaden the knowledge gap caused by this regulation and how it may be affecting people suffering with chronic pain. https://www.surveymonkey.com/r/Hydrocodone1Yr

Error : Please select some lists in your AcyMailing module configuration for the field "Automatically subscribe to" and make sure the selected lists are enabled